Nainen ja kuolema or a dark bound between sexuality and death 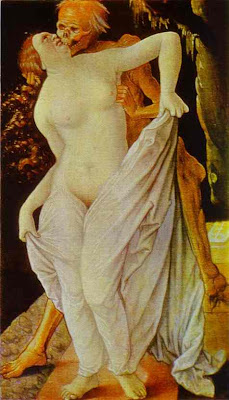 I
1
Death and the Maiden

This theme has a multi-faceted past. It is rooted in very old mythological traditions: among the ancient Greeks, the abduction of Persephone (Proserpine among the Romans) by Hades (Pluto), god of Hell, is a clear prefiguration of the clash between Eros and Thanatos. The young goddess gathered flowers in company of carefree nymphs when she saw a pretty narcissus and plucked it. At that moment, the ground opened; Hades came out of the underworld and abducted Persephone.

This old vision will take a new form at the end of the 15th century and become the theme of Death and the maiden, which will culminate in Germany at the Renaissance. In many dances of Death already figured a representation of Death with a fine lady or with a beautiful virgin. The image of a young woman was also found in the three ages and Death. However in both cases, there was no trace of erotism. But with Death and the maiden theme, something new happened. People discovered a dark bound between sexuality and death.

In this type of iconography, the young lady was not involved in a dance anymore, but in a sensual intercourse, which will become always more erotic as time went by. Unlike the dance of death, the Death and the maiden pictures dont have any verses to explain them. Due to that, this new kind of illustration lost somewhat of its dramatic intensity; its didactic role became less impotant. On the other hand, this form of art gained a kinf of intimacy. However in spite of the sensuality of this genre, it still had a moralistic goal; it kept on pointing out the fact that life is short as is the proud beauty of a woman. Her body, her face, her hair and her chest will someday feed the worms. The theme of Death and the maiden has sometimes been used pretexts to represent female nudity.

II
http://www.youtube.com/watch?v=XoZJkkWX8Yw&feature=related
Franz Schubert - Death and the Maiden - Quartet in D Minor
*
Satunnainen kommentaattori kirjoittaa: 'I played this in my quartet a while back. This has to be one of my favorite compostions...ever. The cello part was the coolest things I've ever played. Everytime I listen﻿ to it I fall in love again.'