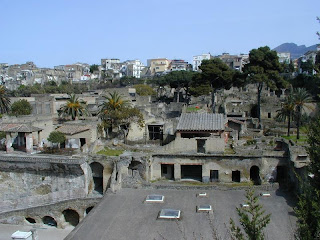 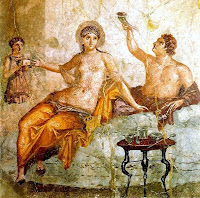 Alakuva: Herculaneumin epikurolaiset elitisti-snobit nautiskelemassa viinihuuruisen makeaa elämää ja keskustelemassa [ilmeisesti kreikkalaisten vieraittensa kanssa] erittäinkin syvällisistä asioista vähän ennen Vesuviuksen purkautumista. Yläkuvan fresko: Vesuviuksen tuhka- ja laavakerrosten alta esiin kaivettuja muinaisen Herculaneumin raunioita.
.
The  dialogues Cicero and others wrote were not transcriptions of real exhanges, though the characters in them were real, but they were idealized versions of conversations that undoubtly occured in places like the villa in Herculaneum. The conversations in that particular setting, to judge from the topics of the charred books found in the buried library, touched on music, painting, poetry, the art of public speaking, and other subjects of perennial inteterest to cultivated Creeks and Romans. They are likely to have turned as well to more troubling scientific, ethical, and philosophical questions. What is course of thunder or earthquakes or eclipses – are they signs from the gods, as some claim, or do they have an origin in nature? How can we understand the world we inhabit? What goals should we be pursuing in our lives? Does it make sense to devote one’s life to the pursuit of power? How are good and evil to be defined? What happens to us when we die?
.
That the villa’s powerful owner [Lucius Calpornius Piso?] and his friends took pleasure in grappling with such questions and were willing to devote significant periods of their wary busy lives to teasing out possible answers reflects their conception of an existence approriate for people of their eduation, class, and status. It reflects as well something extraordinary about the mental or spiritual world trey inhabited, something noted in one of his letters by the French novelist Gustave Flaubert: 'Just when the gods had ceased to be, and the Christ has not yet come, there was a unique moment in history, between Cicero and Marcus Aurelius, when man stood alone.’ No doubt one could quibble with this claim. For many Romans at least, the gods had not actually been ceased to be – even the Epicureans, sometimes reputed to be atheists, thought that gods exist, though at a far remove from the affairs of mortals – and the ‘unique moment’ to which Flaubert gestures, from Cicero [106-46 BCE] to Marcus Aurelius [121-180 CE], may have been longer or shorter than the time frame he suggests. But the core perception is eloquently borne out of Cicero’s dialogues and by the works found in the library of Herculaneum. Many of the early readers of those works evidently lacked a fixed repertory of beliefes and practices reinforced by what was said to be the divine will. They were men and women whose lives were unusually free of the dictates of the gods [or their priests]. Standing alone, as Flaubert puts it, they found themselves in the peculiar position of choosing among sharply divergent visions of the nature of things and competing strategies for living. [p. 70-71]
*

Sitaatti on Stephen Greenblattin kirjasta The Swerve – How the World Became Modern.
*