Against The Grain: 'What if violence is needed to keep things as they are?' 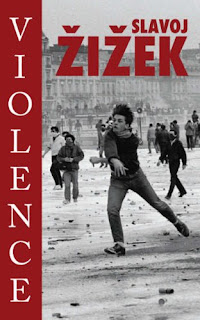 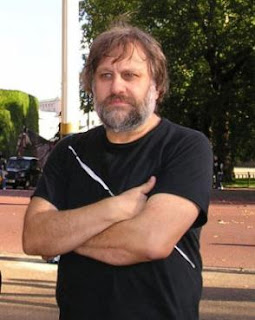 Slavoj Zizek: 'Undertake an active non-participation'
Tämän lyhyen Zizek-haastattelun haluan kohdistaa mm. Iinekselle, joka on monesti ollut niin kovin huolestunut näistä asioista - lähinnä subjektiivisesta mutta myös symbolisesta väkivallasta. Väkivaltaa ei kuitenkaan voi ymmärtää kokonaisvaltaisesti ilman tajua systeemisestä väkivallasta. - - Tärkeintä väkivaltakeskusteluissakin on osata ensin rationaalisesti määritellä sekä erotella, mistä puhutaan, ja Zizek antaa meille pätevää selvennystä asiaan.
'Objective violence is precisely the violence inherent to the ‘normal’ state of things. Objective violence is invisible since is sustains the very zero level standard against which we perceive things as subjectively violent. Systemic violence is thus something like the notorious dark matter of physics, the counterpart to an all too visible subjective violence. It may be invisible, but it has to be taken into account if one is to make sense of what otherwise seem to be ‘irrational’ explosions of subjective violence.
*
Interview by Nick Jackson

Slavoj Zizek is international director of the Birkbeck Institute for the Humanities at Birkbeck, University of London. Professor Zizek argues that our understanding of violence is wrong.

How do we experience something as violent? We measure it by some zero level of normality. When nothing changes, when things just go on as normal, we say this is zero level, and then when something disturbs this, it is violence.

We should shift the perspective and ask, what if some kind of violence needs to go on to keep things the way they are? What if what we think of as violence is a distraction? To understand this, we must distinguish between subjective violence, systemic violence and symbolic violence.

Subjective violence is violence that is actively done, which can be attributed to a certain subject, such as a murderer, the police, a mob, terrorists – you can see who did it.

Systemic violence is anonymous violence. An example is George Soros. He has done wonderful things with his foundation, but if you look at his market speculation with currencies 10 years ago, what was the effect? Hundreds of thousands losing their jobs in south-east Asia. It was a social tsunami. This is anonymous, systemic violence.

And then you have symbolic violence. Today in the West, there is an obsession with harassment. Anything that another person does to you can be harassment. There is something very violent in this extreme sensitivity to another person's proximity. I'm opposed to the ideology of tolerance, because what we call tolerance is a form of intolerance.

How do we respond to this systemic and symbolic violence? Often I'm for a certain mode of violence. I don't have any problems with Chavez in Venezuela. People accuse Chavez of being too dictatorial. But he is not intervening in a zero violence space. He is intervening in a violent system. And the only way to intervene is to be counter-violent.

At other times, the most violent thing is to do nothing. Take feminism in traditional masculine societies: what seems like a non-violent patriarchal relationship relies on violence. The most important thing is not to protest, but not to participate. The first feminist text is Aristophanes' Lysistrata.
Sometimes you can disturb things most just by no longer participating, by stepping back. I'm not saying just do nothing, but undertake an active non-participation. In my sense, Gandhi was very violent. Of course, he wasn't violent in the sense of subjective violence, but, by not participating, he disturbed things, he prevented things functioning normally.
PS.
Critiquing the liberal concept of pacifism as the rejection of all forms of subjective violence, Zizek instead implores the endorsement of forms of emancipatory violence, as ‘To chastise violence outright, to condemn it as ‘bad’ is an ideological operation par excellence, a mystification which collaborates in rendering invisible the fundamental forms of social violence.’ (p174) The argument here is that by colluding with the social, economic and political conditions of massive inequality and extreme poverty, people are perpetrating forms of systemic violence which breeds the necessary qualities of resentment and anger which cause the subjective violence abhorred by pacifists. What Zizek claims is necessary then, is a systemic transformation to eliminate or at least minimise the systemic violence endemic to globalised capitalism.
Consequently, Zizek argues that ‘Sometimes, doing nothing is the most violent thing to do.’ (p183) In situations where everyday life perpetuates a cycle of poverty and misery for others – often those who have laboured to produce goods consumed in the first world, but also marginalised groups within western nations – the most violent thing a person can do is to simply ignore this systemic violence and lead an uneventful life, claiming to hate violence while creating the conditions of a society which produce it.
http://mediaecologies.wordpress.com/2008/06/09/violence-slavoj-zizek/
*
Against The Grain: 'What if violence is needed to keep things as ...
http://www.amazon.co.uk/Violence-Big-Ideas-Slavoj-Zizek/dp/1846680174
Posted by Rauno Rasanen at 10:48 PM